Fisherman caps have captured their own place along the way from the early days of being adopted by Greek fishermen and factory workers to nostalgic hats for the ’70s fashion scene. It enjoyed notarity in “Fiddler on the Roof” where it became know as the fiddler cap and as the biker cap in “The Wild One”. It became a unisex favorite and a preferred hat of the ’60s counterculture. It combines structured fit from its band and stiff bill with the cooling comfort of it relaxed crown and continues to be the cap that finds it way onto heads time after time. It is a traditional casual favorite.

Warning: Some of the subject matter in the custom prints used for the Folies Headwear line may be considered offensive and not suitable for all audiences. Some have a minimum age for access and to order them.

The fisherman caps were featured in this virtual festival and include the new Folies Headwear line ones, too.

Check out the available fisherman caps below. If you don’t see what you are looking for, please press here to contact Rawls-Riley Creations for assistance.

The fisherman cap took on the fiddler cap name when it was worn by the milkman character, Tevye, in “Fiddler on the Roof”, a 1964 musical. The musical enjoyed a popular and sustained Broadway run. It was the daily cap for Jewish boys in the times of the story and Tevye was Jewish.

During the early days of motorcycling the fisherman caps found their way into the biker culture as a result of its being used by Harley-Davidson in some of their headgear. That also lead to their being adopted as part of the greaser culture. It became known as a biker cap.

On February 6, 1964, the Beatle’s broke records for largest television audience in the United States with their Ed Sullivan Show performance. It was on that trip that John Lennon was seen wearing a fisherman hat. It was such a favorite of his that it became know as the John Lennon hat.

The latest trending name for fisherman cap is baker boy hat. In 2017, designers included baker boy hats in their fall lines and the lines tended to blur as to which traditional, hat styles actually fit and could ride the growing popularity wave. 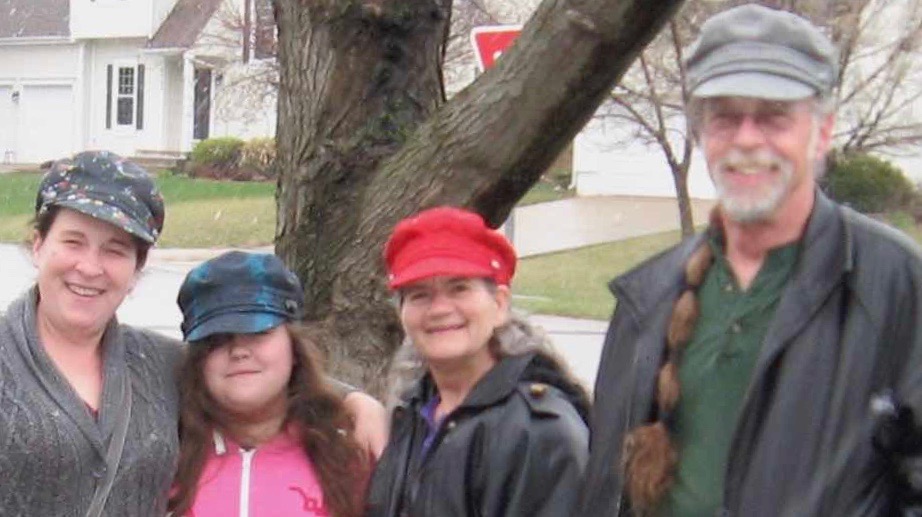 Fisherman Hats for Us

It was unusual to get snow in April, but that did not stop us from getting the picture. I have a red fisherman cap. I made a darling one for my daughter with small flower bouquets on black. My granddaughter picked the turquoise and black material for her’s because that is a favorite color. Tony went for the warm, wool, gray fisherman cap.

Tony has a favorite blue one he wears regularly and was good with having a picture with his motorcycle, too. 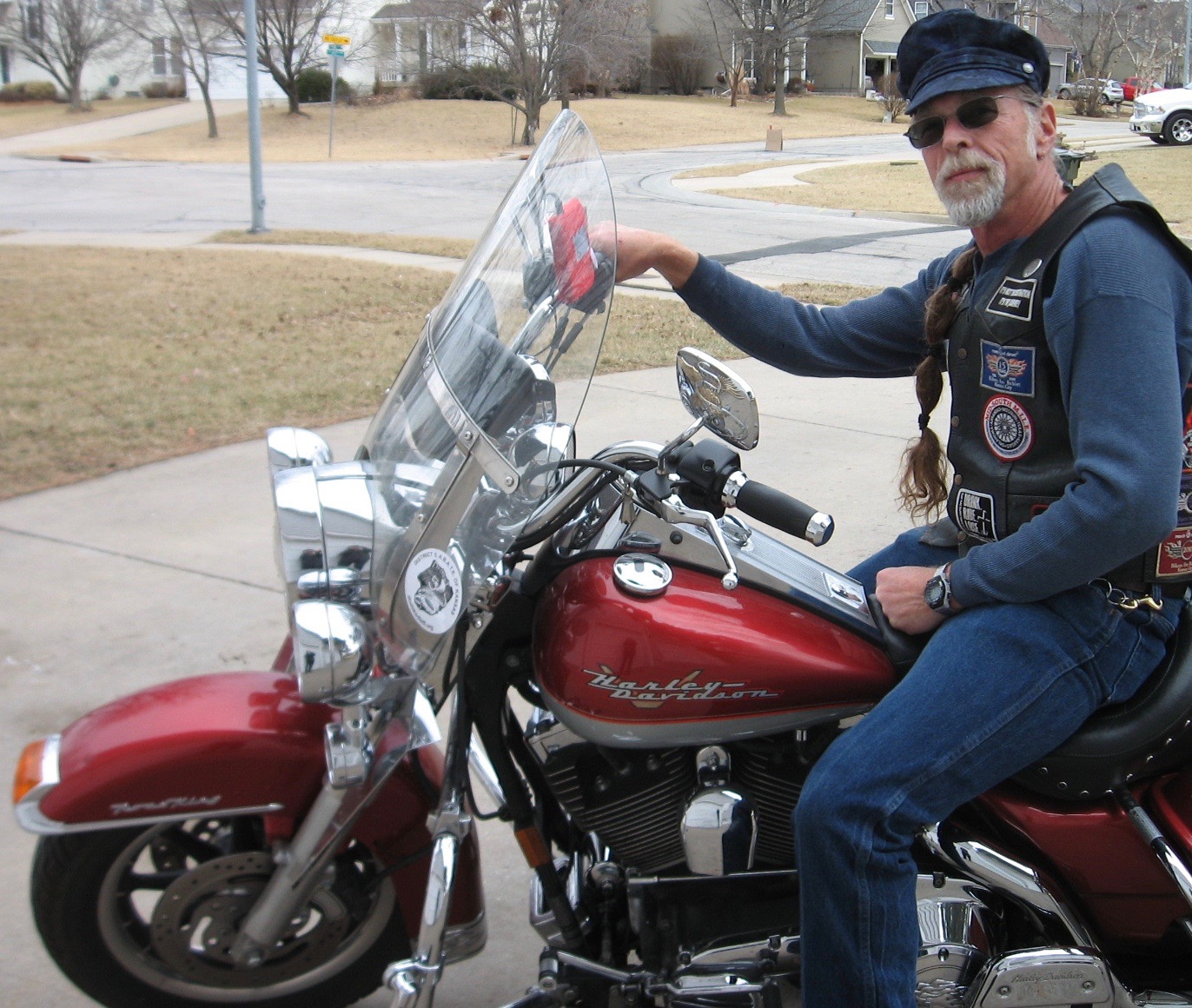 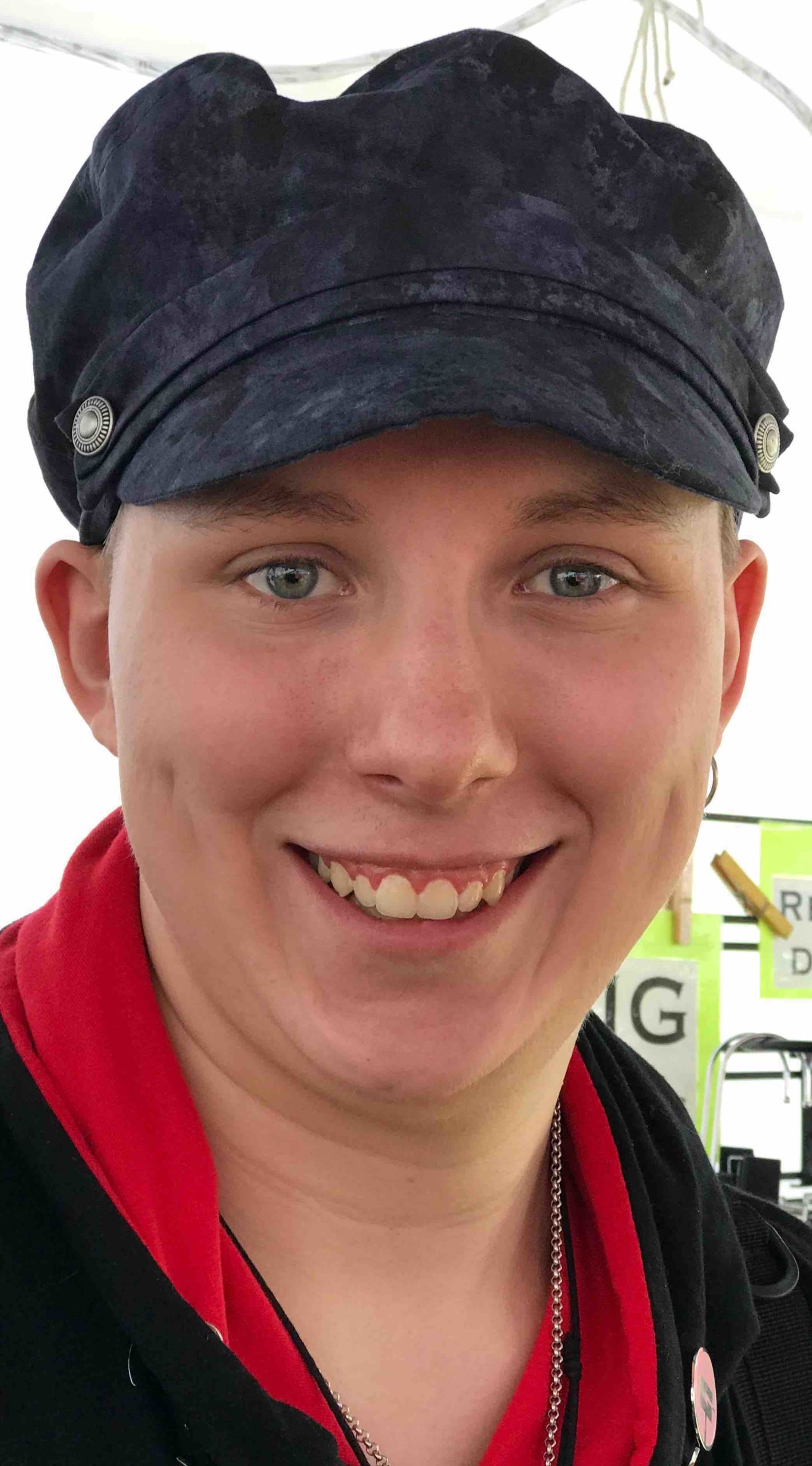 He saw the headwear at the John C. Fremont Days and stopped. He took the time to check out several and the fisherman caps had the style he liked. It was the blue one that he kept coming back to and finally settled on.

Pleased to find the cap in blue, he gladly let me take a picture.

The next year, he stopped by in his hat. He wears it daily and the people who work with him say they really like it, too. It is his Mom who says that the most.

His Mom liked his fisherman cap so much, he had to get one for her the next year.

The banded hat has a stiff bill to shield against bright sun and a soft, round crown. Its pleated, front band has accent buttons.
E

Relaxed front on the crown transitions to a shorter, soft back which offers a comfortable feel and casual look.
E

Fully lined cap. The bill is firm and may be adjusted as desired to avoid those pesky sun rays.

The sweatband had enclosed terry cloth (noted in the details about the cap) or is comfortable CoolPlus® (Macro International Pattern #Micro-655) wicking. Content: 55% CoolPlus® + 45% polyester.

How to Set Desired Bill Curve

The pressed, foam bill is sturdy and may be set into a personalized curve.


All of Our Fisherman Caps —

Made in the USA

All of our fisherman capss are original designs by Rawls-Riley Creations. They are 100% made in the United States of America.

How Do I Measure My Head Size?

Press here to learn how to measure your head. It will help in selecting the best size for you or to give as a gift.

Reach out and let us know what you are thinking about and we’ll be happy to create something special just for you. Please call 913-397-8071 or email [email protected].

Press here to see about the custom headwear made for other customers. 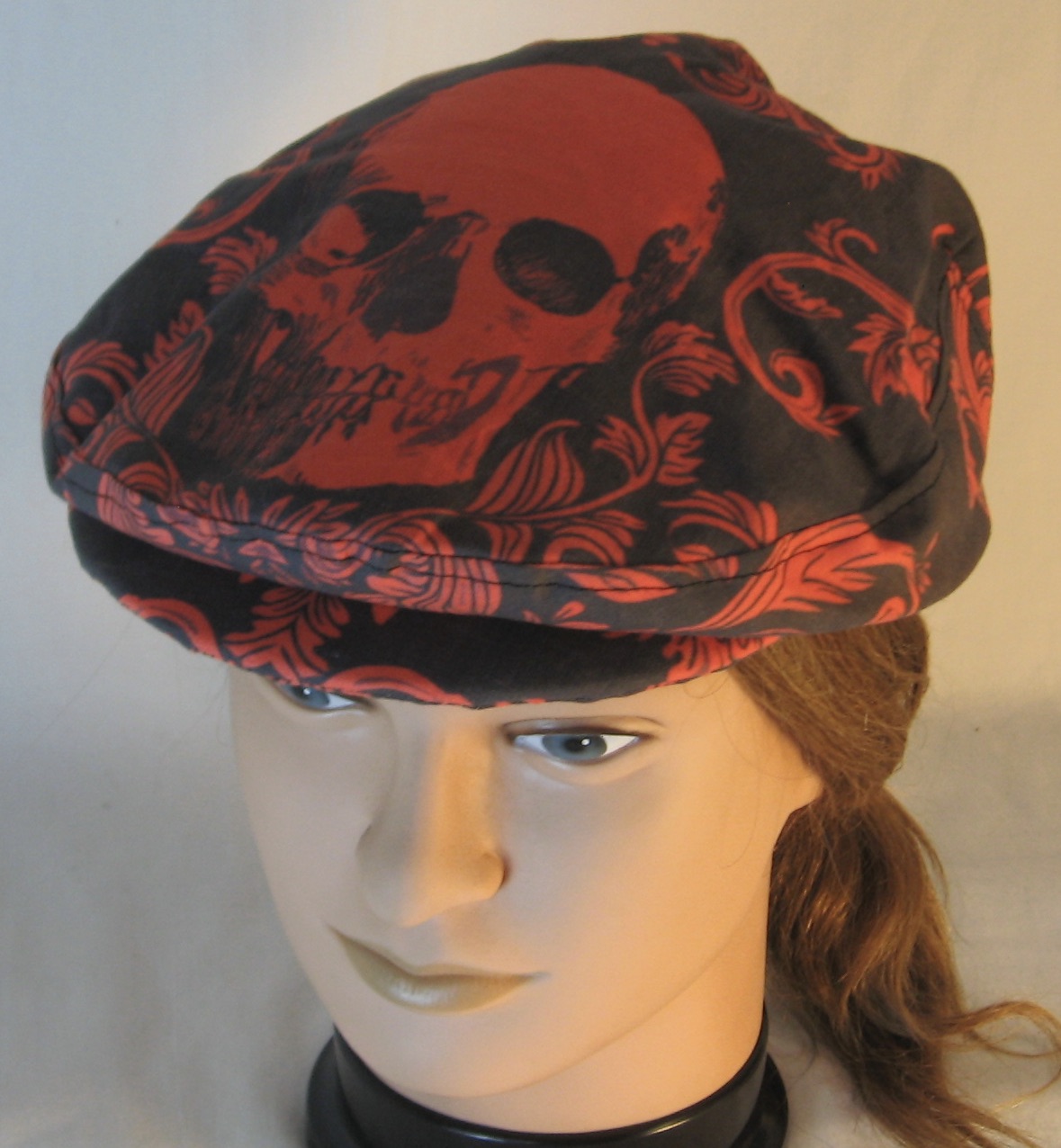 See some of the headwear created using custom prints material by checking out the sold out gallery. It does include some fisherman caps. Press here to see the gallery. 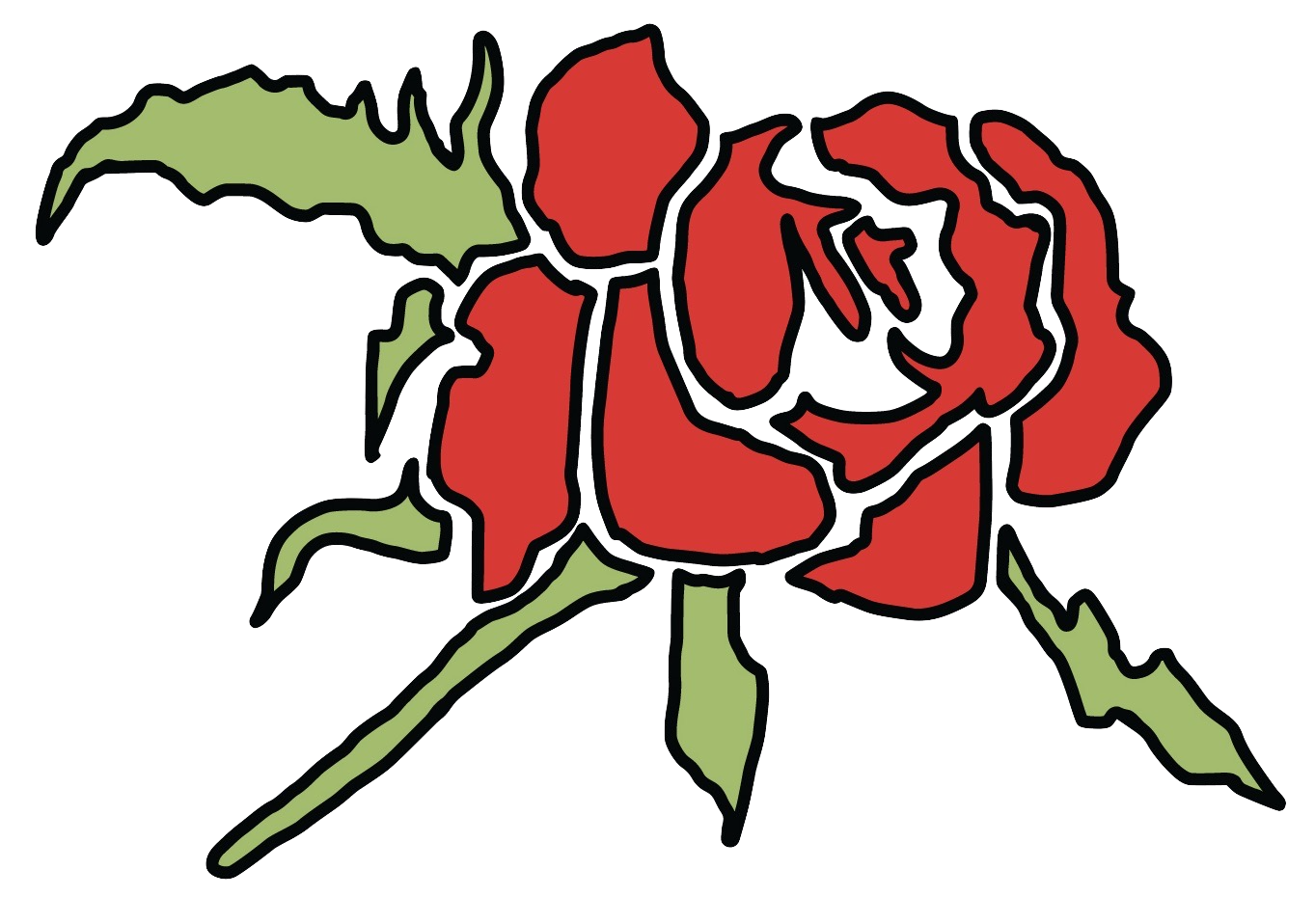